Ultralightweight fabric with 4-way stretch teams up with deeply articulated knees, a gusseted crotch, contoured side seams, and tapered, partially elasticized cuff hems to deliver a sleek fit and exceptional ease of motion. A clear coating on the outer shell increases the soft hand feel of the fabric, and a durable water repellent (DWR) finish causes sweat and light precipitation to bead up on the surface for easier evaporation. Welt hand pockets, a pair of zippered back flap pockets, and a hidden zippered pocket on the right thigh add deceptively spacious storage to the trim, ultralightweight design. 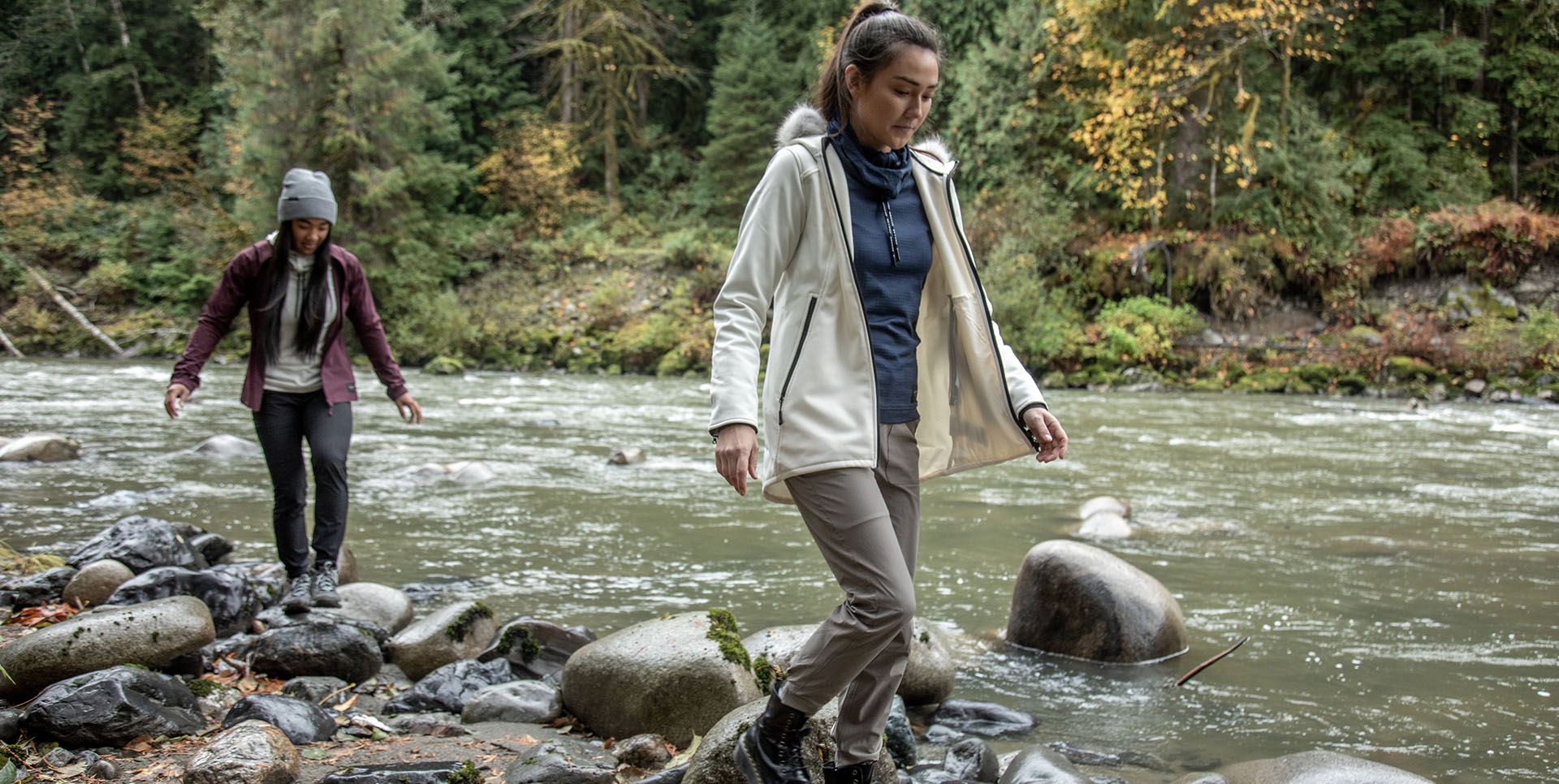 These pants are amazing. Light, stretchy, and best of all, they fit perfectly! I usually wear a 6, but ordered a 4 based on the chart measurements. 5'7" and 130 lbs. I wore them hiking in France, and they look so good I could wear them to the restaurant for lunch too! I am going to order another pair.

Now I own every color

These are the most comfortable, perfect cut/fit, stretchy pair of outdoor pants I've come across. For general reference I purchased size 4 tall. I am 5'9 152lbs with an athletic build. I now own 4 pairs of them. I have several other brands that are now just sitting in a pile feeling left out bc I now ONLY wear these Ultralight L4 Joggers when I head out to climb mountains and adventure!!! Treat yourself by jumping into a pair in order to see what all these ah-mazing reviews are about!!!!

Great for travel and hiking. Love the pockets!

I've had the Alpha for a couple months now, all great experiences with it.
The Alpha's fleece lining makes it comfortable on bare skin for quick outings where you don't want to layer up, it's DWR treatment makes sure that, even if you don't have a rain layer, your adventure wont be ruined with light rains, it's great at preventing the wind chills that typically phase right thru layers such as these while remaining breathable, and it has served me greatly to temperatures of ~30F alone.
Some bonuses are the fact that the Alpha has four pockets unmodified-all of which are fleece lined and protected just as you are-along with the fact that it can fit helmets somewhat decently, though don't expect to be wearing an Opscore that's fully built out.

Overall, I love the Alpha. I think that it performs extremely well for it's price and I'm quite happy with my purchase.

I have stocked up on these shirts since 2019. The heathered tan and green tops have earned rank as my favorite base layers. The exterior has not pilled like some other top shelf brand offerings. The interior weave stands off the skin, while the zipper allows for substantial heat dump. The simple hood does what it was made for. This pullover will keep you comfortable and dry...
I hope Beyond keeps this top AS IS, and offered in TALL!

It has a wide hood that can accommodate other hoods below it, although it was designed for helmets. It is slightly more compact than the Testa Softshell 5 jacket. I can fold the aptus up quite well and stick it into my tenzing pack. The side pockets have a deeper well, so things won't fall out sideways as easily. It has the heart outside pocket, which is great.

The fleece lining reminds me of how honey comb blankets are, except instead of trapping heat in the pockets, the circles allows heat to transfer between the layers. I wore it over a L3 lochi reversible. I am 5 8 ish, 170-185 lb, with thin bone structures. The L3 lochi fits with an M, barely, around the shoulders, and somewhat tight on the lower back and belly. The Aptus I got was L sized, so easily fits over the L3. I felt no mobility constriction as a martial artist and massage worker, except at the elbows which prevented full contraction via the biceps.

It is slightly heavier than the L3 Lochie, about the same weight as the Testa Softshell, but is less bulky than the Testa Softshell 5 due to the compactness. Temperatures in GA now a days is 29 low 50 high, and it felt great during the evening and morning. During noon, unzipping both layers to mid solar plexus works to ventilate. I don't wear the Aptus as the second layer only, especially since my first layer is a summer shirt, since it doesn't trap the heat next to the body. It works better as an outer third or 4th layer.

I've bought a few pieces of Beyond's clothing line and they are quite well designed. Even the sleeve pockets have a use, although perhaps not the way they intended it. I put crystals and potential armor into the pockets. Anti cut gloves can be stashed there, to be used later, or even just to protect your bicep in a martial conflict. Cloth armor was often used as a base layer back in the ancient days.

Pretty much where this around the house now instead of a sweatshirt! Super Light weight and amazingly warm! I work as an in home dog trainer working out in people yards in Minnesota winters and this winter I got this jacket and layered like I had been in previous winters and man it does work! 20 degrees I feel perfectly comfortable with just a mid layer and t-shirt underneath! Dog training is mostly not labor intensive so I was worried about standing still and being too cold and I was cooking and had to take layers off underneath. Like I stated previously wearing it indoors I have just a T-shirt under and I was amazingly comfy!

The jacket is very good!